Mix one part “tour” with 2 parts imagination and some time with your feet up to enjoy what God has made and man has embellished with his handiwork and words, by enjoying another refreshing peek at a corner of the world in southeast Kent, England.

Oh, and be sure to turn off the news while you sit and relax for a bit.-pbn

Colin Markham is a frequent contributor. His other tours are featured here. He writes on Christian spirituality and fellowship at fellowshipofstpeter.  This feature originally appeared on his blog and is reprinted here with permission.

Time and timelessness: a visit to Barham, Kent. 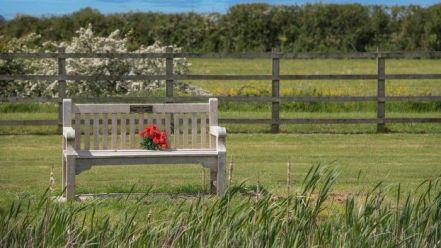 Viewed from the uplands to the east, the contrast between the tranquillity of the valley below and the hectic pace of traffic on the main highway illustrates the uneasy tension between posterity and modernity. Fortunately the march of progress barely intrudes on the outstanding natural beauty of the landscape. The world passes by with hurried insouciance. Rolling hills bedecked with woodland form a graceful backdrop to picturesque villages nestling in the valley. Dwellings cling to rising land, mingling with leafy verdure and the expanse of pastureland. Church steeples protrude from the trees like sacred landmarks. The effect is one of serenity and peace, made perfect by the sparkling ribbon that connects all the villages, the Nail Bourne. The clear rippling waters flow among 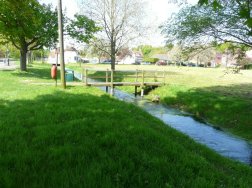 The Nail Bourne at Barham

folds of fertile land like a silken thread running through the luxuriant robes of mother nature, a timeless stream of life-giving liquid.

One October day I went in search of old Barham. I climbed a silent hill under a sombre autumn sky. I came to a point where all the elements combined, where time seemed to stand still. What I had viewed from afar as idyllic scenery now cast a spell and I was drawn into a mystery. In the shadow of the church I inhaled the atmosphere. The winding road, the juxtaposition of buildings and the archaic ambience filled the air with something indescribable. The greyness of the season and the time-honoured structures, infused with a certain mystique, created an enchanted tableau to be relished in the still cool air. The spirits of the ages had captured my imagination and held me there to hear the echo of ancient stones, to witness a special moment in time. 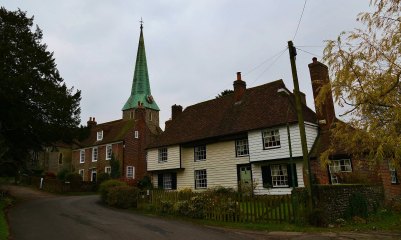 The parish church of St. John the Baptist might be said to symbolise both stability and continuity. In times past the distant spire will have brought joy to many a weary traveller, the prospect of safe lodging, rest and refreshment after the open road, a sheltering roof instead of porous bowers, a hearty meal in place of meagre crust and humble apple. Then to tarry a while and hear the lofty tones of the Prayer Book [1] celebrating the liturgical season and thanksgiving for the fruit of the earth. The people of the valley depended on abundance, all who lived and toiled among the flocks, orchards and furrows. Manor, field and pasture persisted for  generations to maintain the equilibrium, the ever-turning wheel of human endeavour. Enclosed by the eternal hills with their warm and protective aura, the countryfolk must have felt safely secluded from the world beyond their confines, a rustic community lost in the mists of time.

In the church several monuments attest to affluent domains. The northern reaches of the

valley are marked by a number of large mansions. Barham Court, with its facade of 1723, is a fine example. The additions by Lutyens [2] in 1912 skilfully blend with the Georgian motif. Nearby, medieval Little Oak Hall and Corner Cottage form a charming duo, like inseparable and neatly-attired siblings. Lower down, a parade of pretty villas face the greensward in the centre of the village. Along The Causeway, the eighteenth-century Friend’s Cottage suggests a Quaker provenance, and on Derringstone Hill the Wesleyan Chapel of 1836 displays nonconformist simplicity typical of its time.

There are many delights to be found among the sixty-eight listed [3] buildings in the parish. These noble relics greet you with a benign air of individuality. Are there ghosts? Do they emerge from musty alcoves to flit through the shadows in the twilight hours? The stories they could tell! The lives and loves, the triumphs and tragedies of all who have passed through those portals, the human condition revealed in the fullness of time. 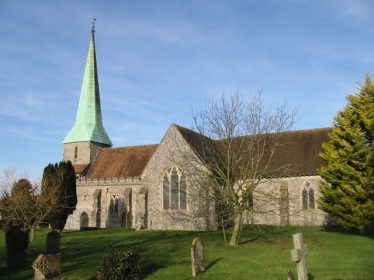 Image of bench in Kent, source.

Image of Barham Village and Saint John the Baptist Church from the public domain.

This entry was posted in most recent posts. Bookmark the permalink.