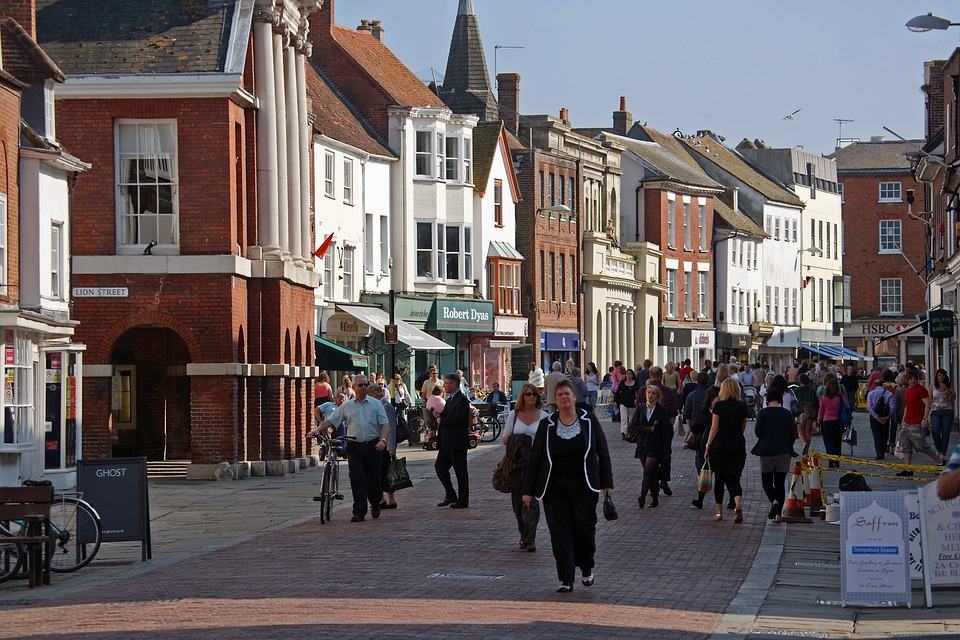 Chichester (pop. 23,731) is the County Town and administrative centre of West Sussex. It is in my estimation the perfect English cathedral town, or more properly ‘city’. All cathedral towns in England have the status of a city, even tiny Ely.

Chichester is almost entirely flat and navigating it is easy due to the medieval layout of streets called North, West, South and East, extending in straight lines from the central focus of the town centre, the Market Cross, dating from 1501.  All of the streets mentioned are broad, creating an impression of spaciousness and room to breathe rather than jostling congestion.

All but West Street are lined with shops, cafés and restaurants.  Pallant House (1712), just off East Street, is well worth visiting for its eclectic displays of art works. There is a café and bookshop.

The cathedral is a major presence in the town centre and of considerable interest. It occupies a prominent position at one end of West Street.  Romanesque in style, it was begun around 1080 and consecrated in 1184 in the reign of Henry II.  Its graceful spire can be viewed for miles around.  Stately in design and proportions, it is smaller and less daunting than Canterbury Cathedral which is on different levels, requiring some effort to tour its sprawling magnificence. The cloisters lead to tea rooms a gift shop. From here a passage leads to a row of fifteenth century houses with attractive gardens. These are adjacent to more substantial buildings in Canon Lane, including The Deanery (1725). Most of these properties are constructed in honey-coloured stone, mellowed with age and a delight to the eye. The medieval Canon Gate leads into South Street.  At the other end of the cathedral domain is the bishop’s palace. Pleasant public gardens for rest and quiet times complete the ensemble.

‘What Chichester has in addition, on any kind of clear day….is the gently rising backcloth of the South Downs two or three miles away, so that God, man, and nature always seem to be in equilibrium. And from anywhere on those slopes….the effect is unforgettable: the plain like a sea, tipped with a glitter or a shimmer which really is the sea, punctuated by only one slim spire.’  (Ian Nairn and Nikolaus Pevsner: Sussex. Yale University Press, 2003 [1965]).

Chichester does not impose itself on the visitor but gently draws him into its ambit with an effortless charm that is somehow typically English. The town exudes a tone of modest civility that manages to blend different eras into a timeless whole. As with Canterbury, parts of the old town wall remain as a prominent reminder of its medieval heritage. There are pleasant walks around and beyond the town. Chichester is well served by rail with regular trains to London and Portsmouth and a coastal service between Southampton and Brighton.

Whilst staying in Chichester one of my favourite projects is to walk 8 miles (13 km) W to Emsworth, on the Hampshire border. This route is mostly at sea level and includes some charming features. Historically the most important site en route is Fishbourne Palace, a museum built over an excavated Roman villa (second to fourth century), complete with a tessellated floor and numerous artefacts. There is a café and gift shop. The coast here is indented with inlets, on one of them the pretty village of Bosham with its interesting church. Emsworth (pop. 9,492) is a picturesque little town with a sandy inlet.  There is a small collection of shops, pubs and cafés.

Arundel (pop. 3,408), 10 miles (17 km) NE, presents an impressive sight when viewed from the train as it speeds through the water meadows of the lower Arun Valley. The splendid castle, the home of the Duke of Norfolk (late eleventh century with considerable modern additions), and the French-style RC cathedral (1873), form a dramatic tableau on their hillside perches. The quaint town below offers a choice of eateries and pleasant riverside walks.

Portsmouth (pop. 238,137), 18 miles (29 km) W, for HMS Victory (Nelson’s flagship at Trafalgar), Spinnaker Tower, Old  Portsmouth and the cathedral, and Southsea Common with fine views towards the Isle of Wight, which can be reached by a ferry from Portsmouth Harbour.

This entry was posted in COLIN MARKHAM FEATURES, most recent posts and tagged tour of Chichester. Bookmark the permalink.