On Ozymandias, Religion, and Christ the Redeemer

Jesus answered, My kingdom is not of this world: if my kingdom were of this world, then would my servants fight, that I should not be delivered to the Jews: but now is my kingdom not from hence (John 18:36).

A reader has brought to my attention the poem “Ozymandias” (the Greek name for the Egyptian Pharaoh Ramesses II) by Percy Bysshe Shelley:

I met a traveller from an antique land
Who said: Two vast and trunkless legs of stone
Stand in the desert… near them, on the sand,
Half sunk, a shattered visage lies, whose frown,
And wrinkled lip, and sneer of cold command,
Tell that its sculptor well those passions read
Which yet survive, stamped on these lifeless things,
The hand that mocked them and the heart that fed;

And on the pedestal these words appear:
‘My name is Ozymandias, king of kings;
Look on my works, ye Mighty, and despair!’
Nothing beside remains. Round the decay
Of that colossal wreck, boundless and bare
The lone and level sands stretch far away.

Although the picture above shows another view of the famed and massive statue Shelley describes, the message of both words and image are the same: though the mighty at his zenith of power would in his hubris declare superiority over all, both artifact and actor are at length–and inevitably–leveled. The statue is fallen through the erosion of time and sand; the potentate and his kingdom, by physical and historical decline.

We know something about Ramesses II, of course, and other famous world figures, but not much if anything about innumerable others who, although feeling invincible at the height of their own power, are now also dead and forgotten in some searing sand or cold crypt.

But just as the artist in the poem knew well the sneering gaze, mocking hand, and greedy heart of Ozymandias,  so do the artists, historians–and commoners–of every era who observe and memorialize  in word or art their own cruel leaders, cruel because any who wield such extraordinary power as did Ozymandias are easily corrupted. As the aphorism goes: “power corrupts; absolute power corrupts absolutely”. 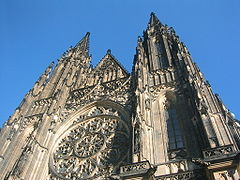 This brings to mind the idea of religion, defined here as, “a set of beliefs concerning the cause, nature, and purpose of the universe, especially when considered as the creation of a superhuman agency or agencies, usually involving devotional and ritual observances, and often containing a moral code governing the conduct of human affairs.”

And it is in this arena, that is, the playing field of man’s search for ultimate meaning, the most potent Ozymandiases reign, specifically, in religions that mandate human behavior instead of faith in God’s Son, Jesus Christ.

Sources estimate there are approximately 4,200 religions organized under several main types–of those that are officially recognized, that is. But there are likely many more we do not know of, and more “offshoots of offshoots” added to the list all the time not to mention ever-morphing cults  which are religious systems that are unorthodox and spurious, some, very dangerous. Of course any belief system can contain elements of a cult, just like any religious system can contain elements of truth.

So considering the innumerable religions, belief systems, and philosophies available, there is a lot of hunger out there to satisfy. The eye is ever drawn to the evidence of something “powerful and intelligent” in the heavens, “nature’s God,” as some put it, while the heart is drawn to the primal need for love and acceptance.

And the quest starts young: “Mommy, what’s on the other side of the sky?”

It is those vulnerable of any age and status, including you and me, who can and do become the prey of the opportunists, the current “Ozymandiacal” exploiters who look around for something entirely different in the quest pattern. They see great potential for profit off of the need of the people for a prophet. So they build their own kingdoms with upgraded doctrines (for a new era) but enough of the old verses to keep the purists at bay.

Clever and brilliant sales men and women cobble together what markets well to base needs as well as to all manner of wants–and they adjust, adapt, upgrade, and add more sparkle to their religion products to keep the customers coming back for more. These days, it seems the “business model” of success seems to be working very well. Here is a good summary of this new “plan”.

Other best-selling schemes assure the flock they, too, can become healthy, wealthy, and wise–become like God, even, if you think about it, by simply naming and claiming this or that desire without necessarily any input from the Holy Spirit. “Look,” they say. “It worked for us!”  (and don’t forget to buy our books and DVDs on how you, too, can do this, for sale in the vestibule).

When it comes to most religious systems, however, fear, shame, and guilt are a few of the best motivators to keep the, well, fearful, ashamed, and guilty in the pews looking for relief.

Meanwhile, the Bible gathers dust underneath the pew, outsold by the gilt and glory of yet another mental and/or physical monument erected more for mankind’s glory than God’s. The Spirit-infused words of God are shoved farther and farther down the list of resources, or off the list entirely, replaced by the growing collection of, these days,  “How To Be Your Happiest You” and “A New Social Gospel for the Kingdom Now” hot picks.

But for those seeking the real Gospel and who at length will come to identify yet another fake, the inevitable awaits: crumble, crash, crickets.

(Thus the ever multiplying number of false religions, philosophies, theories, etc.,  stacked up on the tables…at the entrance to the temple…)

However–and here is the good news of the Good News–for every counterfeit religion–4,200 or maybe even 420,000 and counting–there is that “real,” this one not found inside four expandable walls, a fancy door, and stained-glass windows or a man-made batch of behavior mandates, but in a Person with Whom we can have a relationship.

This One, Jesus Christ, not only supersedes all the sparkle and flim-flam of the cathedrals of commerce, you might call them, He is able to restore each of us when the idols of pride inevitably topple, when we and perhaps those around us whom we have also harmed–and who have harmed us–fall to pieces.

And for the best news, Jesus will, if we yield, even restore the years the locust has destroyed (not to mention the sand-blast of time) though it may take time, while all the while He is faithfully and gently perfecting that which concerns us through the power of the Holy Spirit sent to lead, guide, correct, and direct (largely through that old dusty book underneath the pew).

And hearts of stone are transformed.

On Christ the Redeemer 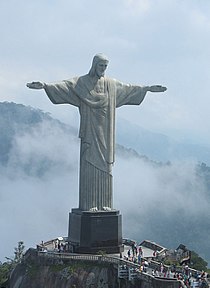 This real Savior is not on the take, rather “on the give,” as in He gave His life to pay for our sins so that we can be reconciled with God for eternity. In other words, He reaped, on that bloody cross, what we sowed.

(Pardon me while, once again, I pause in awe, here, not yet fully comprehending the length, depth, and breadth of that in my own life, but gaining gratitude daily.)

This Savior is not a religion, but One with whom we can relate because He first related to us. Literally. In the flesh. Which He then gave for us (see above).

But best of all, when we become “woke,” as they say, to the inevitable damage done ourselves and those around us by the artifacts of pride, it is He Who faithfully and gently restores back to life all those who “so will” by our faith in Him.

At the base of HIS “statue” and enshrined forever in the hearts of those of us currently “in (the) progress” of restoration, are these words:

Come to me, all you who are weary and burdened, and I will give you rest. 29 Take my yoke upon you and learn from me, for I am gentle and humble in heart, and you will find rest for your souls* (Matthew 11:28-29).

*Want this too? Consider: “For God so loved the world that he gave his one and only Son, that whoever believes in him shall not perish but have eternal life” (John 3:16).

(There is a lot more on this in that book, by the way…)

3 Responses to On Ozymandias, Religion, and Christ the Redeemer